My shoulders hurt as soon I put on my pack this morning.  Usually it takes some time before they hurt. Carrying so much water combined with so much food has really weighed down my pack.  I just calculated that my pack likely weighed 44 lbs coming out of Tehachapi.  (13 lbs baseweight plus 13.2 lbs water plus 18 lbs food)  It was heavier than it's ever been.  The shoulder pain is not sharp, it's a dull ache.  I'm going to try to adjust so more weight hits my hips and not much on my shoulders.  We have one more long water carry of 19 miles, and less food now but my pack probably weighs 38 lbs now leaving the water source.  (11 lbs of water plus 14 lbs food plus 13 lb baseweight)

I dallied while Ian got his water.  I didn't want to start hiking, afraid my shoulders were going to be in pain.  After putting it off until 9 am, I put on my pack and walked.  With the pack higher on my hips, my shoulders were doing good.  I still had to take breaks fairly often to give them a break.  The trail went into another burnt area.  We saw some poodle dog bush, a plant that is worse than poison oak if you're allergic.  I've also heard the allergen can blow onto you in the wind.


We hiked through more windmills.  So many!  We saw one that had burned or fallen apart, and there was debris near the trail.  I also spotted a jet fighter doing maneuvers.  It disappeared over the ridge before Ian saw it, but we could hear it still. 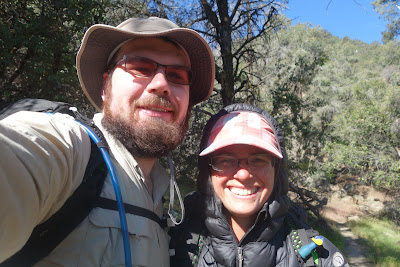 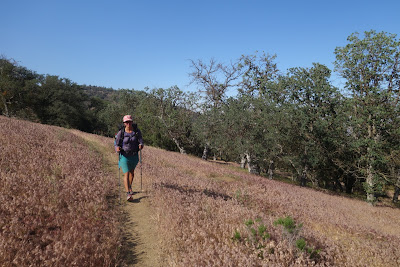 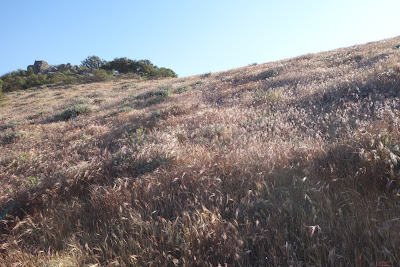 We stopped for lunch after the burned area, where there was finally some shade.  We found a sloped but grassy spot and laid down the ground cloth.  I ate and then took a long nap.  I woke up around 2:30 and found two bloated ticks crawling away.  I had not felt them bite and they had filled up already.  I smashed them, then looked for more.  I dound two unbloated ones, one that was very large, and squished those.  I found one more bloated one by my legs.  Great.  I had a red mark on my index finger, my leg and my forehead where they had sucked my blood.  Gross.  I've never seen ticks like these before, they work so much faster than those I'm used to in North Carolina.  I left a note warning people not to siesta there.

We hiked uphill to Hamp Williams Pass, but we found a great spot in the pine trees one mile before it, so we stopped there for the night.  There were lots of dead pines, so we were careful not to be directly under one.  As we got ready for bed at just before dark, we heard another jet fighter, but didn't see it.