We're in the real desert now, but the cold front made for nice cooler weather, so we slept in and didn't start walking until 8 am.  We saw a vulture in the morning.  We had 10 miles to hike to get to Hiker Town, mostly downhill but with a few uphills thrown in  as the trail went over ridges. 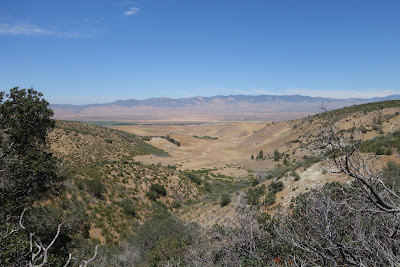 We stopped for a break with about 5 miles left.  I felt like getting to Hiker Town quickly so I could get some real food, charge my batteries, get my resupply, water and head out.  After Hiker Town, it's 17 miles to water and a lot of hiking on the Los Angeles Aqueduct.  You can't camp in the 6 miles after Hiker Town.

When I got there, not many people were around.  I didn't see the owner, but there was a sign up describing the suggested donation for services.  I donated $5 for day use of the premises and $5 to pick up my package.  Brain Turtle and Roadblock got there 30 minutes after me.  We caught the next shuttle to Neenach Market, which is supposed to be every hour.  It skipped one hour though.  There was pizza and beer trail magic that someone dropped off.  That light beer tasted really good to me. 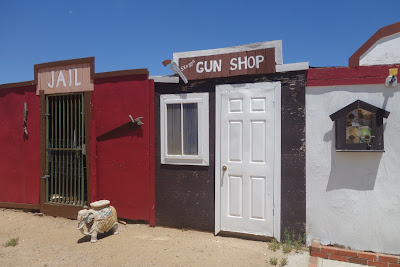 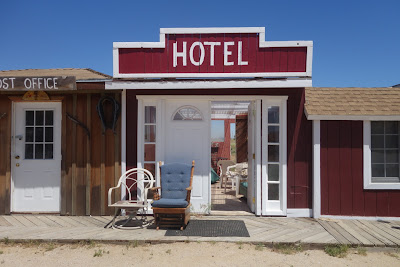 Neenach Market is a gas station with a cafe.  Nice people.  They have a vegan black bean burger that is good.  It has a little crunch to it.  I checked the trail register and saw that I'm gaining on some friends.  Dave, Steve and Dan are two days ahead now.  Cliffwalker and Stakes are 5 days ahead.  I keep thinking I'm slow but you know that whole tortoise and the hare bit.  I just keep going.  It's been a while since my quadruple zero in Lake Arrowhead and I'm looking forward to my zero in Tehachapi with Ian.  It will be so good to see him and spend time with him.  He's going to hike with me for a few days!

I ended up taking the rest of the day off and spending the night in Hiker Town.  It was nice to see some people I hadn't seen in a while.  Vegan Daniel was there.  Also, Susanna, Laura, James, the Bridge People, Akillies, Niels, Steele and Korra.  Lots of others were around also.  I met a girl named Catastrophe while she was comparing her new and old shoes.  I've got to get the story behind that name.  I met a guy named Ryan.

Hiker Town is an odd place.  It's like an abandoned Wild West themed park that has beds thrown in it.  I'm not sure if the owner built it that way for Hikers or bought it.  It's certainly unique.  All the buildings are some theme; saloon, post office, doctors office, cathouse, etc.  It's sort of a free for all, the rules are just that you donate and the rest is kind of up to you.  You can camp or stay in a bunk or on a couch.  The bunks  are likely not cleaned between hikers.  There are two bathrooms for the whole place.  I camped in the back with some old cars, boats and dune buggies.

A cute little black kitten tried to get in my tent and I pettted him, scooped him up and he snuggled me, purring.  He reminded me of the tomcat that made me love cats back in middle school, my Bonkers.  Does he want to be a hiking cat?  He was very interested in attacking my tent cords and the screen on my tent.  Yikes!  Had to keep my eye on the little trouble maker.  I threw little rocks for him to chase to distract him from my expensive tent.

Bob, the owner, came and brought the kitten in for the night.  That kitten ran right up to him, so sweet.  He's got a good home.  It's bedtime for me!