On the opposite end of the country my husband, Ian, woke up at 4:30 am.  He boarded a plane to San Francisco, changed planes and landed in Bakersfield.  He picked up flat rate boxes for me in Bakersfield and missed the first bus to Tehachapi.

I started the day 17 miles away, in Tylerhorse Canyon.  I got ready pretty quickly and set off up the hill. Almost everyone there caught up to me at some point or another, but they were taking more breaks or maybe longer breaks, so I would pass them while they were stopped.  I just walked alone most of the day, listening to music and moving. 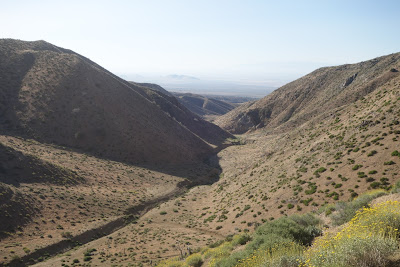 There was a long uphill climb through a burnt area.  Near the top, there was a SUV stopped and a couple giving trail magic!  They had apples, peaches, oranges, hard boiled eggs, fruit barrels and water.  A lot of people were stopped there, and more came while I was stopped.  I decided to eat my lunch there also, even though it's a little early.  When I stop for longer than a few minutes, my muscles cool off and I have to start off slow, so I wanted to combine the breaks.


I stopped with the French/Israeli/German group and checked on Ian's progress.  He had missed the bus, and said he wouldn't be in town until 4.  So, I stayed with them until they finished their break.  We all started hiking together, but Tin Tin in the front is moving fast and I'm in the back moving slow, so we all got spread out.  I'm slow for a thru-hiker.

When I got to the road, Froggy Peanut and Rainbow Wheel were still there.  A trail angel had picked up the rest and was coming back for them.  I checked my texts and saw that Ian was taking an Uber since​ the bus was all messed up on Saturday.  He was going to be in town in twenty minutes!!!  We were dropped off in the center of town, and I wanted to see Ian, so I walked to the motel.  I knocked on his door and he answered!  He looked happy but not surprised.  He knew I was close to town.

I took my shower and then... fade to the fireplace.  Oh, this is an old motel, but there's no fireplace, so fade to the misspelled sign out front.

We had dinner at Thai Hachapi.  We both had a tofu curry.  Yum!  We walked around the downtown a little after, taking it in.  There was a western style dance event happening, with women dressed in cute Western dresses and skirts and men wearing cowboy hats and boots, all duded up.  We ran into the guys from Hong Kong, Even and the others.  They were heading to the grocery store.  I was tired so we went back to the motel.