(Ooops, somehow this day did not publish when it should have, so here it is now.)

I started the day by oversleeping the timer, since I forgot to set it.  Oops.  It was a lovely cool morning in Hiker Town, the hikers were stirring early to get a head start on the aqueduct section, where it's 17 miles to the next water source.


I set off hiking and got confused about where to go pretty quickly.  I could have sworn I had come this way.  My phone was off and charging from the battery, so I couldn't check the Guthook app.  The two guys from Israel came up and they figured it out.  I followed them.  They both had to stop soon to put on warmer clothes and I passed them.  It was a very cool morning, great for hiking and the terrain was flat.  Soon we reached the LA aqueduct at the end of a road.  It was an open, rushing river with concrete walls.  I wouldn't want to fall in, it would likely be the last thing you ever did.  A bridge crossed the open aqueduct.

Later, the aqueduct turned and went into a large metal tube.  The PCT followed, on top of the aqueduct.  There was an access road next to the trail, I walked on both a little to change it up.  Walking on the aqueduct was fun, there was some sand and dirt up there in patches, and an asphalt coating for traction.  There were knobs where the plates joined that we're hard to walk on, and big enough to trip you if you didn't pay attention.  It was windy up there, but you were above the landscape so you could see far.  The road had less of a view, but was protected from the wind.  The walk was a little monotonous, but not as bad as I feared. 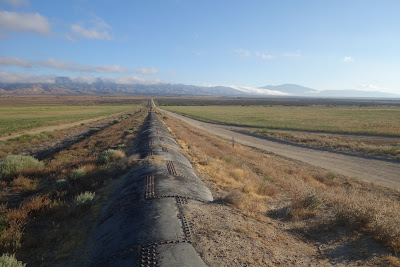 The aqueduct turned to the right and changed again to a concrete tunnel, about as wide as a road and the top was level with the road.  You could walk on either and switch back and forth easily.  There were several hikers stopped for breakfast.  I had mine a little earlier.  I left at the same time as three people from France I hadn't met before.  A woman named Charlotte or Rainbow Whale, Froggy Peanut and Martin aka Tin Tin.  I talked to Charlotte for a while.  Froggy Peanut was quiet, but he obviously understood the language.  Tin Tin would interject here and there, but mostly he listened to music, occasionally dancing down the trail energetically.  He also would pull out one earbud and have you listen, then sing.  Fun guy.  He doesn't speak as much English, but he's learning quick.

The walking was so flat and easy, we did 11 miles before 10 am.  Amazing!  I'm going to get to Tehachapi a day earlier than planned!  I'll see Ian!

There was trail magic, two guys up here for the weekend.  They had Gatorade, sodas and beer!  So nice. Steele and his dog Korra were there.  Korra decided she needed a longer break and curled up next to the cooler, refusing to move.

We stopped for lunch at the next water source, a canyon with a bridge over it and a faucet for water.  I didn't need any, it was so cool I wasn't sweating that much.  I ate with the French folks and many others.  It was the international crowd.  There was Alex from Germany, a really tall guy, Niels and the guys from Israel.  I took a nice long nap.  The French group left before me, the others after.  They caught up to me, though, since they are faster up the hills.  The trail started to go up into the hills and into the windmills.  There was a sign from the windmill project saying we are welcome to visit, but it is 1 mile off trail.  I took a short break with a couple, Katie and Alec.  They also passed me while I took a short break with a lesbian couple from Australia, Red Back and another lady.  They told me a little about Chopper Reed, a notorious murderer in Australia.  I love their chill attitude.  These older ladies have hiked a few long trails.

The last few miles went up and down quite a lot, wearing out my tired muscles.  I just kept plugging along.  I reached Tylerhorse Canyon around 5:30.  It was a long day, and I covered 24 miles!  I camped with the French group, the two Israelis and Alex from Germany.  Even, a guy from the Hong Kong group was there, but he left to go up to the trail and wait for the rest.  They like to hike at night and he doesn't.  I learned how to say goodnight in Hebrew and French, although I'm sure I'm butchering the French.