This morning I dug a shallow mass grave for 16 flies.  No one cried, but for every fly I swatted, 6 more came to the funeral.  I'm a serial fly killer.  I laughed maniacally and danced on their grave.

We met a dayhiker with a dog, who confirmed that it's going to cool off in two days.  The dog was sweet and big and liked petting.  3 more flies died while hiking.  I saw some white X marks in the rocks and I wondered how they formed. Roadblock actually knows how they formed and told me.  Minerals under pressure work their way up using cracks in softer rock.  Sills go with the grain of the rock, dams go crossways.

The Bridge People passed us while we took breaks.  There are a lot of them, but they don't hike together all day, so we saw a few at a time.  50 Shades and a small group stopped first.  Then we saw Ballistic, Coke and Choke and Horse Cage. Coke and Choke likes Coke, and one of these days he's going to choke someone. 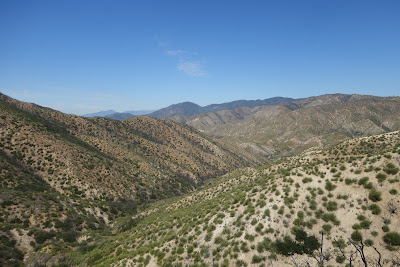 At around 11:30, Flatfoot and 3 Germans going our pace, passed me on break and then stopped in the shade of a scrub oak.  We joined them in the shade.  Their names are Seven up, Salamander and Gpsy.  Giver joined us briefly and then hiked off into the desert heat, uphill.  No thanks.  We're trying to get the second half of a good night's sleep here.  Akillies walks up, saying there's a restaurant two miles up the road were near, and he's going to hitch in.  Flatfoot and Seven Up went with him.

They came back hours later, and Flatfoot brought back soda and some fries for us!  Yes!  So good to have a cold drink.  I told my helicopter rescue story to Akillies and Flatfoot recorded it.  We talked about typical hiker things, like water, pooping, callouses, blisters, food and the trail ahead.  Akillies claims he can hold off on pooping​ for 8 hours, and Roadblock asked if he had a bionic butthole.  I said it was a good thing he already has a trail name, because that would be a great one.  I don't think he liked it, not sure why.

We came up with some alternative names he might like better after he left:
Android Asshole
Robot Rectum
Platinum Plated Pooper

Which is your favorite?

The three Germans and Flatfoot left around 4:30.  The temperature in the shade had dipped from 91 to 89.  Akillies left a little later, we were trying to convince him to stay longer, but he doesn't like night hiking.  We left at 5:30.  We stopped for dinner at the next water, a little seep coming out the side of the trail.  Someone had rigged up some bark to direct the flow.  It took a few minutes, but you could fill a bottle by just leaving it under the flow.  We were getting a little loopy from lack of sleep.  Brain Turtle tried to put her hair up in a ponytail and said "I could do a little pony."  Well, that was all it took for me and Roadblock to start laughing like lunatics.  Oh man, I don't think I've laughed that hard in years.  We would look at each other and it would start up again.  I felt like I did in architecture school after staying up all night long, walking back to my dorm or to the coffee shop and laughing about nothing with friends.

We hiked into the night, taking breaks as needed.  I had good signal on one break, and u searched for a YouTube video of Mouse being interviewed about his cross country kick scooter ride.  It's obvious he's a little awkward and nervous about being filmed, but its good to hear some more details. 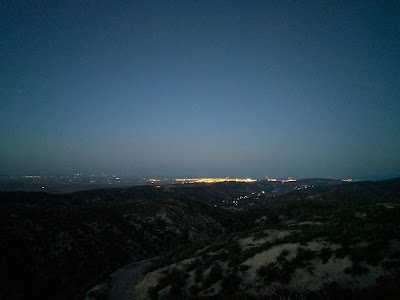 As we walked, we talked about New Brunswick.  I told them about the farmhouse up there, with the flower garden, vegetable garden and the raspberry patch.  Tonight Brain Turtle and I felt good, but Roadblock was tired.  He hadn't slept during the siesta, but at least his foot pain was distracting him from his hip pain.  We stopped after hiking about 14 miles for this day.