I awake at the camping spot on the saddle before the sun rose, packing up my bright blue tent.  I have 23 miles to hike today to reach the road at Etna and thumb a ride, so there’s no time to waste today.  I walk through fields blooming with yellow flowers, none as spectacular as yesterday’s show.

My mind wanders as I climb up a long hill after passing a paved road with little traffic.  Reaching the top of the climb, the trees clear and present a view of a foggy forested valley.   I see the occasional patch of snow near the trail. The next climb is a short but steep switchback cutting across a rocky slope.  Two patches of snow greet me with icy impassiveness. The first is well trod and I walk across easily. The second presents a problem.  It begins as a ledge of thin snow beckoning out to me over the trail. I can see that it is hollow underneath. I’m not interested in the invitation to posthole deep into the rocks below.  I clambered over the boulders on the side of the hill to skirt the snow patch.
Steep craggy granite peaks on my right continue to hold small patches of snow.  The trail cuts into the side of the mountain. I can see where trail crews have reinforced its path.  A large boulder has fallen on the trail, almost blocking it, but I pass by walking perilously close to the edge and steeping over.  Two chipmunks friskily run down the slope, the one in front continuing and the second stopping two feet in front of me. It looks up with surprised brown eyes for long enough that I manage to snap a picture.  It goes back up the rocks with no apparent hurry, turning back to look at me.

The trail enters another burn area, one old enough to have undergrowth coming back.
Following the trail through the forest, I occasionally glimpse a view below of the valley, wondering if I can see the road to Etna yet.  I stop and look again at the valley, realizing what I had taken for fog was smoke since morning was long past. I’ve been out of cell service since Dunsmuir four days ago, long enough for a fire to start and grow.  I send Ian a quick message on the GPS. “Hey, I see smoke in the valley below? Can you check if there are fires ahead between me and Sawyers Bar Rd? No cell signal. Try PCTA website. Luv u.”  I pause there and wait for his response.
His response comes out of order:
“s west of trail between 1600-1610 “Island fire”, they advise to avoid the trail if it is smoky enough to cause health issues.”
“There are two fires in the area but neither of them have caused trail closure at this time.  The one that is of most concern is 5 mile”
“Nothing between you and Sawyers Rd though.”
I breathe a relieved sigh and send him back “Thank you! Good! I will make haste to Etna today, take a zero and see what happens with the fire.” 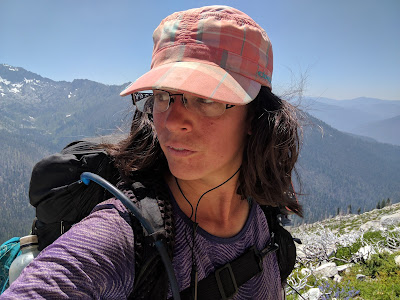 The smoke lays below me in a thin haze.  As I hike down into the valley, I breathe in the smoke but it doesn’t bother me.  I don’t feel the need to put a wet bandana over my face and the smoke continues to be mild.  I pass more burn areas, large swathes of burnt trees without much undergrowth. The white fungi on the blackened trees look like polka dots. Passing a trail junction, I meet a couple of day hikers and exchange quick greetings. I start to see more views of Mt Shasta to the right.
The trail passes close to Payne Lake, I decide it would be a good idea to wash some trail grime off my body before I hit town.  It was cold and refreshing, and I had it all to myself. I stuck to the breaststroke, swimming out with slow ease.  Suddenly, I see something large in the water ahead of me. I let out a panicked shriek and turn to the side quickly. It's a column of rock, sticking out of the lake-bed, but still under the surface of the lake a few inches.  It reminds me of the head of some prehistoric beast, frozen in time, about to surface.
I quickly dry myself with my bandana,  dressed and continued. In a couple of miles, I encounter one of the most dangerous snow patches so far.  Part of what made it so dangerous was that I was under-prepared. I had mailed away my Whippet and traded my crampons for microspikes.  The trail traverses the snow patch, running along the side of a steep ridge before crossing over the ridge and down the other side.  I put on my microspikes and tried not to think about what would happen if I fell, knowing that it would be a quick slide into trees below with no chance of catching myself.   I move slowly and deliberately, carefully placing each foot and planning ahead for the safest traverse, even if it didn’t follow footsteps. I reach the end of the snow safely.  (I learned months later that this snow patch was where Django and Honeybee ended their PCT trek a couple days earlier. Honeybee had slipped on the ice, slid down the slope into a tree and broke her foot.  They plan on coming back for a second attempt in 2018.)


The rest of the trek is downhill and uneventful into Etna.  I get a ride into town with two men in a truck, who throw my pack in the back and offer me a beer. I accept and they drop me at the center of town.  I walk to the Etna Brewery, consuming a veggie burger and a cold beer. I chat with a guy who was staying in town and hiking.  The waiter remarks that the hikers this year seem less ragged and dirty than last year. I respond that it could be because we had all skipped part of the Sierras this year.  Then I set up my tent at the park nearby and go straight to sleep even though the sun had just set. I'm so tired I slept through the noise of thru-hikers chatting at the picnic table next to me.