We had a good weekend in Fayetteville, starting on Saturday.  We left Roscoe with Ian’s parents and drove the 1 ½ hours to Fayetteville, first going to the expo.  The expo building was really run down looking, which was not promising.  The expo itself was fairly small, but that means you can get in and out pretty quickly.  There was one thing worth hanging out for:  The UCAN booth had Greg McMillan, one of the best running coaches in the country and he has the McMillan running calculator on his website.  I was excited to meet him.  I had a short conversation with him about my goal for the race and how I use his calculator a lot.  He said he would be at the finish line and he would remember me.

Then we went for a late lunch around 4:00 at Huske Hardware House, a restaurant and brewery in downtown Fayetteville.  I had a grilled chicken burger, mashed potatoes and a kolsh style beer.  Carbs and protein!  It may have been risky to have a beer the day before my race, but I’ve done it before and it doesn’t seem to affect me.  Perhaps it even helps me relax, calms the pre-race jitters.  The day was beautiful, it was definitely spring, and we walked around downtown, checking out the shops.  We found a nice used bookstore and a delicious cupcake place.

Race Morning
I started the morning with my small bowl of cereal with rice milk, bright and early at 5 in the morning.  The hotel was about a 10 minute drive from the start, but they had closed off a lot of roads, which made it tricky to get in.  We ended up going around, coming in from a small side street to avoid getting stuck in all the race traffic.  It was a little walk to the start, but we had time.  I got in a 1 mile warmup, with a few fast strides thrown in.  I heard some runners talking about me while I was doing the strides.  Don’t care.  Not likely that any of them beat me.  I did a few dynamic stretches, but not many and then headed for the start for one last port-a-potty stop.  They really had the #1 and #2 situation worked out at this race – lots of port-a-johns at start and finish, and 2 at each water stop. 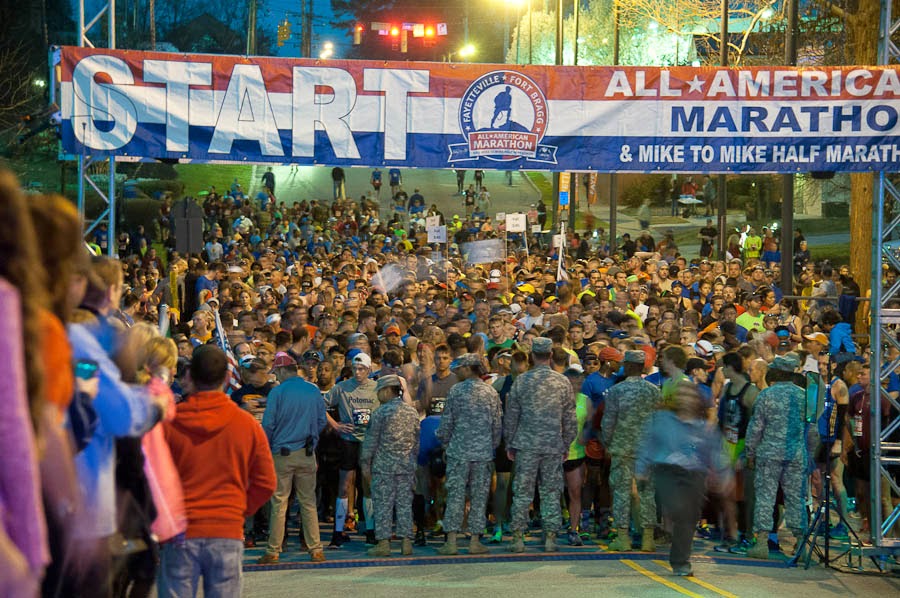 The pacers were all spread out and mixed up at the start – I swear I saw the 5:00 marathon pace group towards the front.  The 1:45 half marathon pace group was nowhere to be found, but I saw 1:30 and put myself a few rows behind them.  Soon enough, with a Howitzer start, we were off.  I took it easy, enjoying the run and letting pace happy people pass.  It was still dark out, we were running by streetlight through downtown, listening to the sounds of feet and a lone guitarist. 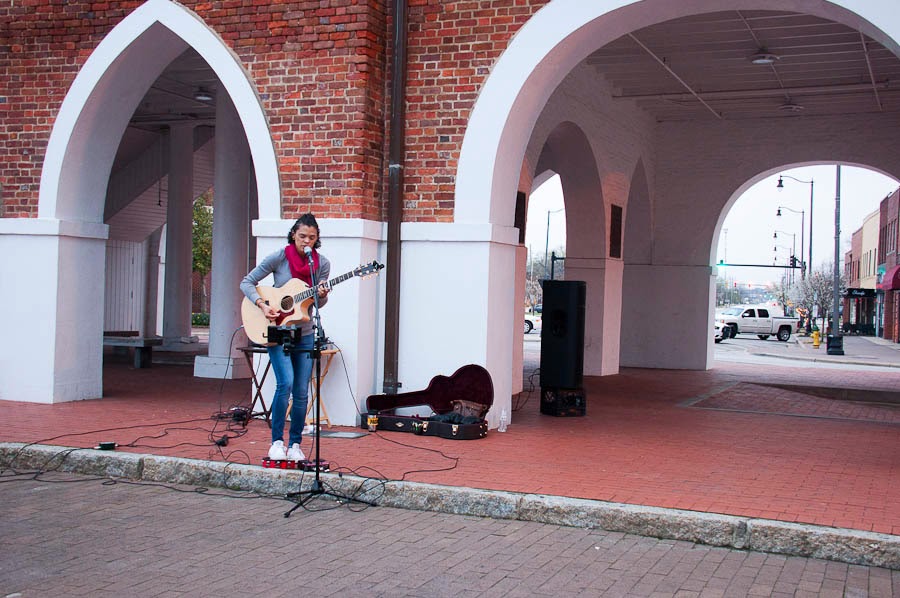 The course looped back around, passing near the start and I caught sight of Ian, telling me I looked great.  Of course I did, the race hasn’t really started yet, but it was good to see him.  At one mile, I finally saw that 1:45 pacer running past me.  I looked at my watch, looked back at him and shook my head.  He was booking it, probably going 7:30-7:45 pace, and he’d lost all of his pace group, if they had ever found him to begin with.  Good reason not to rely on a pacer.  I was sticking to my pace.  Or was I?

I threw my race plan out the window at 2 miles in.  Up to that point, I had stuck to around 8:05 minute mile pace.  However as I sped up to goal pace, it just felt SO EASY.  I just knew I had the perfect race conditions, a nice cool, windless and cloudy day.  I decided to just run by feel, staying to a relaxed pace and breathing easy.  We started to head out into the suburbs of Fayetteville, heading ever so slightly uphill the whole way.  Around mile 4, I saw a man eating some gummies.  I pulled up next to him, “Good idea.” I’m eating my Honey Stingers.  We talked for a little bit, discussing fueling strategies and the fact he’s been running for longer than I’ve been alive.  I’ve noticed that less people are talking the faster you race.  More concentration, less chatter I guess.  These people are serious.

At mile 6, a man yelled out “16th woman, 17th woman” to me and a woman just ahead of me.  I started to count down, passing her, asking “Do you think he was counting marathoners, too?”  Either way, that is a good place.  16.  The race turned left on to the outbound lanes of the American Expressway, a freeway leading into Fort Bragg.  There’s people on overpasses yelling encouragement.  “Go Army!”  “Huah!”  Still an uphill climb.  Still feeling good.  15th woman. 14th woman.  A couple of guys tell me good job as I pass them, I respond with “I didn’t know Fayetteville had so many hills!”  At mile 9, the race goes onto Fort Bragg.  I look at my pace, realizing that even if I run an 8 minute mile pace for the last 4 miles, I’ve got 1:45 in the bag.  Then I realize if I continue at 7:45 pace, I’ll be around 1:42.  I got excited.  Had to tell myself to calm down.  Relax.  The race has just started.
13th woman, 12th woman.  There’s a brass band in fatigues around mile 12, playing “Happy”.  I was smiling through the pain that penultimate mile, so that was quite appropriate.  I can’t see any women ahead of me, so I start counting how many men I’ve passed.

I kept focusing on the next person ahead of me, passing people, but it’s hard won at this point, others are speeding up too.  I’m slowly putting on speed, all the way into the finish.  No big, last minute kick, just a gradual buildup to the grand finale, crossing the line at 1:42:something.  I passed eight men in the last mile.  Did I hear someone say “Fifth woman” as I accept my medal?  I didn’t have time to think about it, I felt like hurling, a little unsteady on my feet as a volunteer asks “Are you alright?”  I leaned on his shoulder for a couple of seconds. Then I told him, smiling and out of breath, “THAT, was a ten minute PR!”

I walked towards the food, slowly.  I hung out there for a little bit, making sure I was alright, then grabbed some food and a finisher bag.  I didn’t feel like eating right then, but I knew I would soon.  I met up with Ian, we’re both really excited.  Then we met up with Joe, my future brother in law’s brother, and his wife Shirley.  They ran the 5k and we talked for a bit before they left and I went to check my results.

The results tent was not picking up on my bib number, she told us to come back.  I got in line for a massage, while Ian looked up the results.  Then he showed me: 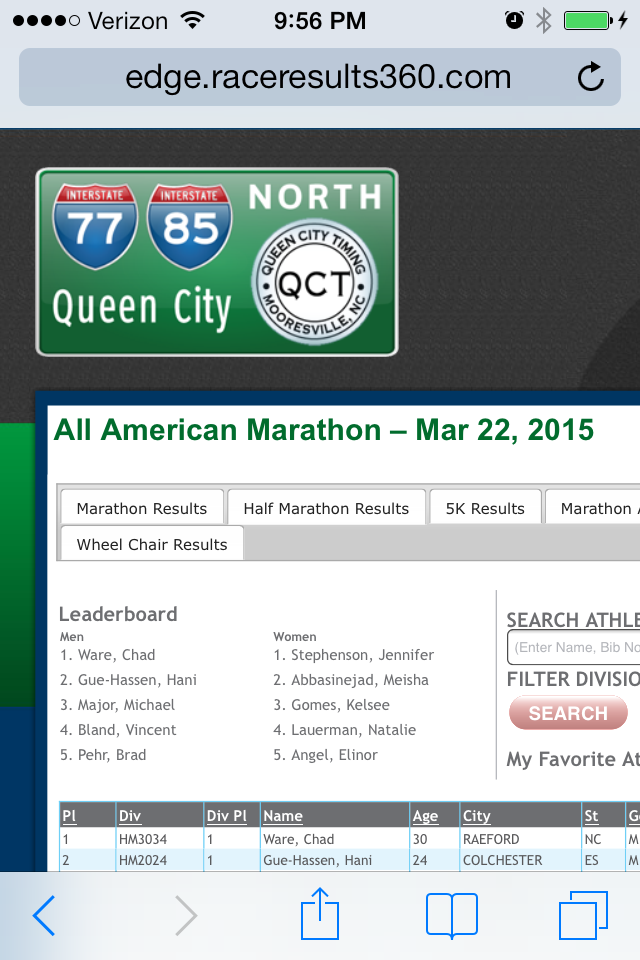 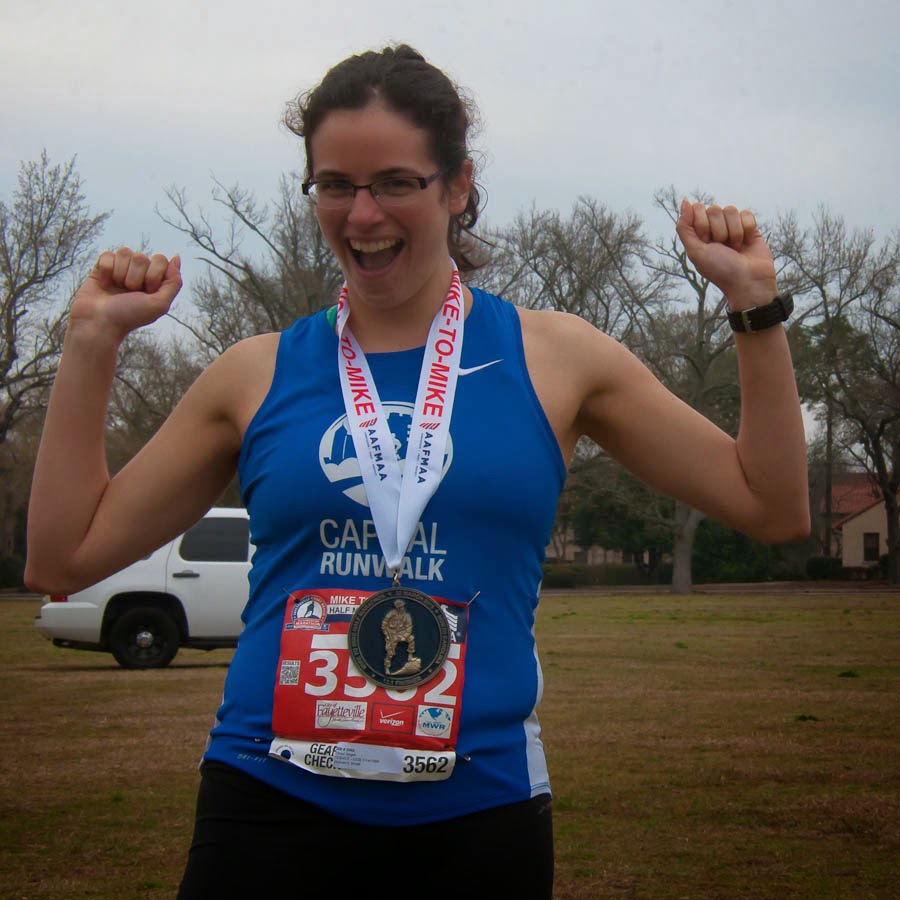 They don’t actually give awards for fifth overall, so what I got was first in my age group, and they’re mailing the prizes.  I’m checking my mailbox everyday.  I realized later that the usual ratio of male to female was way off, so many male soldiers were running this race and not many women.  So, ladies, if you want to check out some very fit men (as you pass them), and possibly win your age group, this is the race for you!

I called my coach on the phone.  This is the first time I've done this after a race, but I wanted to hear his voice when I told him my PR.  I believe he sounded surprised, but he says he's wasn't.  He said he knew I could do it.  I like that, but I still think he was a little surprised, after all, he told me to shoot for 1:45.  Maybe he's just learned that I like to under-promise, over-deliver, when I can.  Before leaving the expo, I stopped in at the UCAN booth again to talk to Greg McMillan.  He remembered me, asking how I ran and I told him my time.  I was so excited about my time and my race, talking to him, that I neglected to get a signed photo from him.


All in all, I'd say this race is poised to be a lot more than it is.  It feels like a small local race trying to be a national race, and I think it could become that.  They don't have the crowd support of a race in a larger city, but Fayetteville has a surprising amount of charm and hospitality.  Plus, we could afford to stay in one of the nicest hotels in the area (Embassy Suites) and still spent less than you would for a night in downtown Raleigh.  The expo was not very good, but the post race hanging out was pretty good.  They kept the bands playing and kept the awards announcements to a minimum.  They also had some pretty sweet looking overall awards - nice glass trophies!  I think the marathon course would be pretty interesting, they take you for a tour of Ft. Bragg and the last half has more downhills than the first.  The weather in Fayetteville this time of year is good for racing, although there is a chance it could be rainy and cold.  They've got a few things to figure out, like pace groups and getting some more women to run.  Umm, ladies, did I mention lots of hot men?