Saturday night's sleep was a little fitful for me. Long nights in the winter are hard to sleep through. I passed the time by reading some of Karen Berger's The Pacific Crest Trail: A Hiker's Companion. I like how she describes the trail, getting more into what it looks like, the plants and animals you're likely to see and a little history. Better than a guidebook that's all about where to turn, but that those directions will be more useful on the trail. 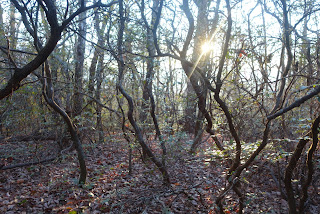 I did get some ZZZZs, when the wind picked up. Something about the sound of wind or rain on the tent just knocks me right out. I woke to the sun softly filtering through the clouds and thick rhododendron. After a quick breakfast and some tea, we hit the trail.

The trail went up at a fairly gentle slope to Woods Mountain. There's a trail to the right going to the old Woods Mountain Lookout Tower. All we saw of it was concrete foundations, but what we were really looking for was a trail down to Tom's Creek. No luck though, the rhododendron was filling blocking any trail that used to exist. We continued on, hiking along the ridge. To the right and left were views through the trees to the next ridge and sometimes further. I believe we could even see Mt. Mitchell to the northwest, rising steeply above the surrounding mountains and then the Black Mountain ridge beyond it. 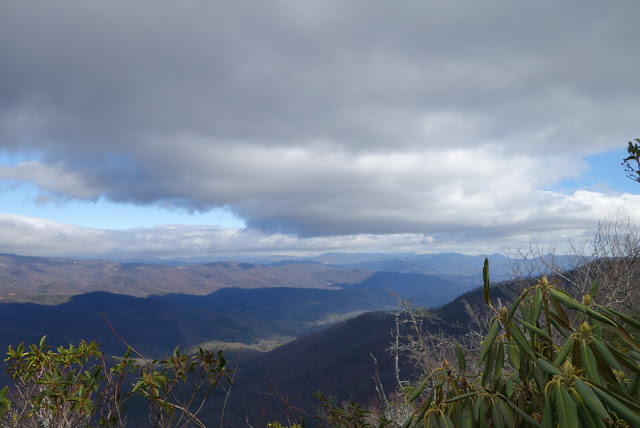 The ridge we're on casts a long shadow in the early morning, which you can see projected on the next ridge. It's a sneak peak of the elevation change ahead of us. We were at the highest point near Woods Mountain, but did not mean it was all downhill. In fact, I'd guess we spent as much time going up as we spent going down, following the ridgeline. 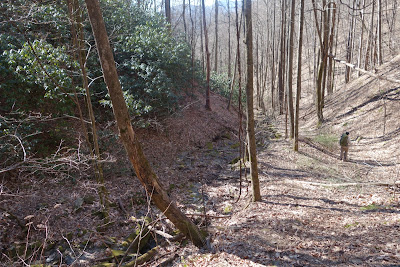 The next trail to the left leads down to a tributary of Buck Creek and was not too overgrown. Ian and I went down, while Mark and Freya waited. Roscoe came with us, and I think he was very thirsty because he kept running pell-mell down the mountain to stream beds, but they were dry so he ran up again. The stream marked on the map was there, but it was very low. Judging from the amount of moss on rocks, I would guess the flow was half of normal or even less. We only found one pool big enough to fill our water, so we took turns. The mountains here are running dry! Hopefully we'll get some good rain in the spring, before the summer camping season starts and everyone starts campfires that could get out of control.

Continuing on the MST, I think we saw the remains of the Clear Creek Fire to the left. That fire was set by an arsonist on Clear Creek Rd last fall. Several fires were set in McDowell County, all except this one were put out before doing much damage. This one reached the peak of Mackey Mountain before a team of firefighters were able to stop it by hiking in and creating a firebreak. Ian and I hiked the trail leading to Mackey a few years ago, a remote spot even more overgrown with old rhododendron trees. 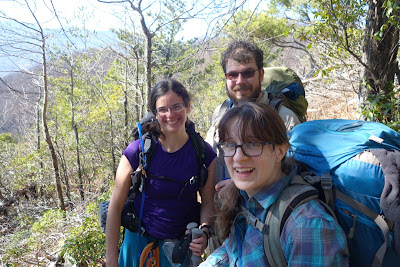 I love remote trails. We didn't see another person all day Sunday, it was very nice. There was a particularly steep hill towards the end, then we rounded a corner and we could see our car parked at the overlook across the valley. It was still a good way around. The last part was a wide fire access road that looks down on the AT. This was the time Roscoe chose to start barking while I had him on the leash. He had gotten accustomed to running free on the remote trails and walking near the front. Bark! Bark! Bark! 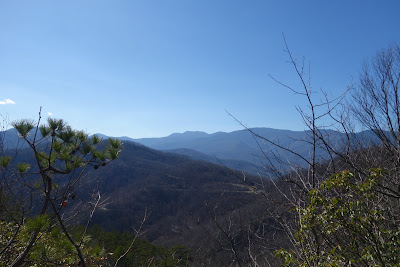 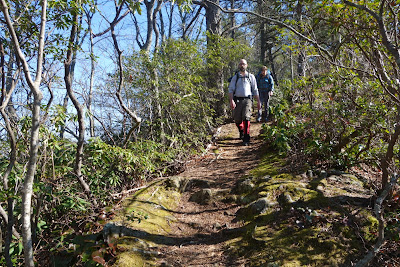 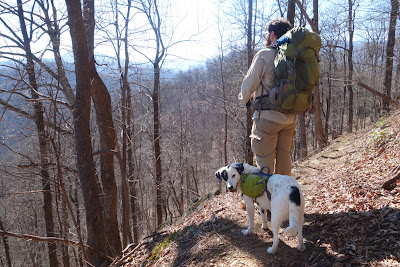 I was glad to get to the car, since that meant Roscoe shut his yapper and so did I. Hey, my mouth was full of potato chips. Perfect just off the trail snack.