The past three weekends have been full of activity, good and bad:  races, cycling, backpacking, work deadlines and dog emergencies.

Three weeks ago, on Wednesday, Ian came back from cycling saying he wanted to do a 60 mile bike ride that Saturday.  I came back from the last Complete Runner group run saying I wanted to do the Cary Road Race 5k on the same Saturday.  We decided to do both.  I went with Ian to the start of the bike ride, dropped him off, and then went to the 5k.  Ian was riding with three of his friends, they stuck together throughout the ride.

I registered for the Cary Road Race 5k that morning, and I had to dig into my change to come up with the $20 fee.  So much for planning ahead.  It was chilly that morning so I showed up wearing jeans and a hoodie over my racing outfit.  It made me think of a nightmare I once had of showing up to a race in jeans and having to decide whether to run it in jeans or not run at all.  Of course, I took off the jeans and hoodie for my warmup and got in a good mile and half, with some quick strides.
I also saw some friends from a previous race in Chapel Hill, the last one where I got a PR.  I was noticing some other fast women around, so this race was looking to be more competitive than previous years.  The first two miles of the 5k felt easier, fairly downhill.  The third mile took us onto the greenway and by a lake, there was a good headwind and more uphills.  I was on pace for good PR in the second mile, but in the third mile it got tough.  My old friend pain showed up again.  When I say that, I mean that it hurt generally, not that one particular bodypart started hurting.  It’s that feeling that you’re pushing yourself very hard, breathing hard, heartrate up and all your muscles are working.
The course went back off the greenway and then uphill on the road.  It was the last hill on the course, I saw the 3 mile sign but couldn’t see the finish.  I was trying to speed up, but it’s hard if you can’t tell where you’re going.  The course goes back onto the greenway to finish right in front of the amphitheater.  That little stretch of greenway was so short and twisty that there wasn’t space for a kick.  It was just sort of over.  I caught a glimpse of the time and it looked like, it was really close to my PR.  I wasn’t sure if I had gotten a PR or not.

The race was small enough that I knew my overall place in the women the whole time.  I started at number 5 and then one woman passed me, so I ended up at sixth place overall.  Not bad.  I was hoping to do better but having those faster women there definitely pushed me to get that PR.  I did get a PR of 3 seconds, 21:43 which is a 6:59 minute per mile pace.  Yes!  Plus, first in my age group which was a prize of $20 at Inside Out Sports.

Now, it’s back to Ian’s 60 mile bike ride.  I went out to see Ian come in and get some pictures of his group returning.  It took a little longer than expected since they had two flat tires to deal with.  It was beautiful weather, though, so I enjoyed the sunshine and warmth and found a pretty spot to hang out.  It turns out the route was a little short, so they didn’t quite get 60 miles, it was more like 57 miles.  Apparently cyclists are a bit less competitive than runners and this was a ride, not a race.  No official results or timing, but they provide support, snacks and lunch.  Much more suited to Ian’s style.

I was cheering at this race, not running.  One of the reasons I decided to race the Cary Road Race was because I wanted to race the same weekend as Complete Runner.  I guess I was feeling a little left out and taper crazy.  The Rock N Roll Raleigh Half Marathon was our end of program race and a lot of runners that I know did it.  I’ve never really come out to support and cheer people on before.  I decided they would need it on those hills and I wanted to pay people back for all the great support I’ve had in the past.  I knew our coach was going to be at the Dorothea Dix campus with his bicycle so I decided to spread out the support and go to the Peace street hill and then the Boylan hill.  I got to the Peace Street hill where it crosses Glenwood, with my bicycle, early enough to cheer Bobby Mack as he zooms past.  I got a few pictures, but they are a bit blurry.  Bobby was looking great, it was about 6.5 miles into the half and he was leading by a large margin, perhaps 5 minutes.  Bobby is a professional runner, sponsored by Reebok and a manager at Capital RunWalk, the running store that does Complete Runner.  He was using this race as a tune-up for a more competitive national race.

I watched for more runners I knew, I know that I missed a few in the crowd, but I did see quite a few people.  I stopped photographing pretty quickly and just stuck with the cheering.  My hands got a bit tired from clapping.  Who knew spectating was such hard work?  When the crowd started to thin down, I crossed it with my bike and set off for the Boylan street hill.  The streets of downtown Raleigh were eerily empty inside the loop, I saw one other cyclist and one car.

RNR had some great props set up over a bridge at the end of the hill and music blasting.  I thought it was fun and uplifting, but someone said the smell of the generator fumes made them nauseous.  I saw more runners I knew, some I had missed on the first hill.  I got near the bottom of the hill and chained my bike to a tree.  I was seeing midpack runners, some people walking up the hill and I saw one of the runners from Complete Runner walking up the hill.  I joined her, got her to run slowly up the hill with me, turning around as we got to the bridge.  That was fun, to join in for a little bit and help someone out.  She was running her first half marathon.  I waited a little bit after that, then headed to the finish line celebration. 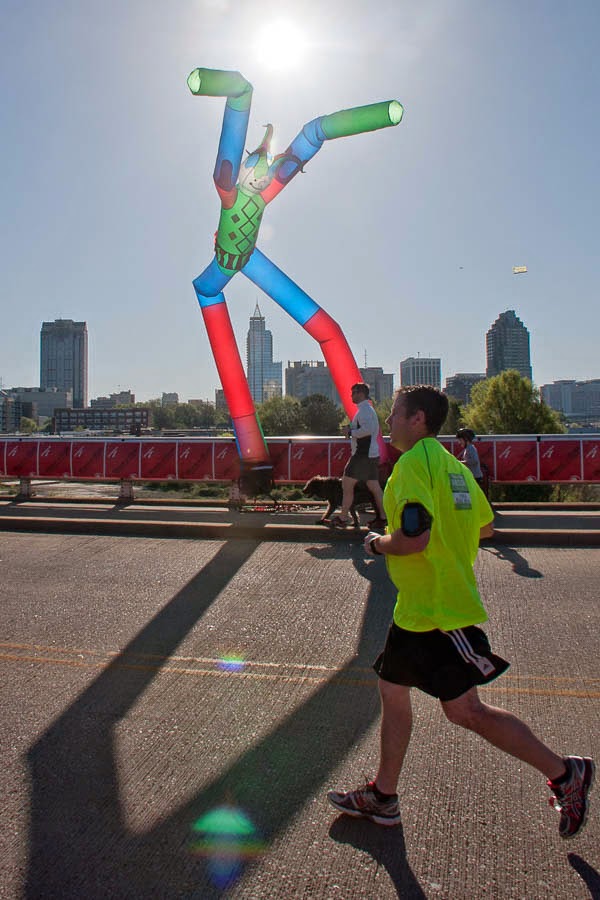 Bobby Mack won the half marathon handily.  No surprise there!  I watched the award ceremony, where Bobby was literally crowned the victor.

I saw a few more people I knew, but it was so crowded that I missed most of them.  I ended up leaving before the big headliner went on stage.  I was feeling a bit drained by the whole thing.


It’s great that Rock N Roll draws so many people to the area, but it makes it hard to find your local runners.  That thought makes me miss RunRaleigh.  The RunRaleigh Half Marathon was my first half marathon, I ran it in spring of 2012 in its inaugural year.  It was a much flatter course, was locally managed and benefited local charities.  The race started in Cameron Village, so being part of the Capital Run Walk race team I got to use their bathrooms.  It had one good hill at the end, going up Ashe Avenue, but I’ve run that one so many times, it’s really not that bad.  It’s a lot better than the Boylan hill.  I actually got a PR on that course the second time I ran it, one month after a super flat half PR.  That was a really great day.  I got a PR, bought a RunRaleigh pint glass and proceeded to get drunk on one beer.  I was so buzzed, the next day I signed up for the inaugural Rock N Roll Raleigh Half Marathon, which happened to be on the same weekend the next year.  I didn’t realize at the time that meant RunRaleigh had to move over to make room for bigger fish.  They tried moving it to the beginning of October, but the attendance was significantly lower and that was the last RunRaleigh.  I missed it due to being in California on my honeymoon.  Excuses, excuses.

At the inaugural Rock N Roll Raleigh last year, I didn’t do so well.  Which was mostly due to the fact that I didn’t train like I should have.  I had a new job, a new dog, and life was hectic.  They only had water stops every three miles.  It was hilly, humid and hot.  I saw a man dying, sadly, this is not hyperbole.  It was not a good race for me.  I didn’t have the warm fuzzies.  Don’t get me wrong, I have run other Rock N Roll races and loved them.  My first marathon was Savannah Rock N Roll and I had a blast.  They do usually put on a good event and they (mostly) did this year in Raleigh.  I’ve just decided that I would rather put my money into local races and support the people who are out there trying to raise money for charity rather than those trying to make a dollar.  Don’t try to tell me that they support charities.  They don’t, all they do is give you a free race entry if you raise enough money for charity.  They don’t let it affect their bottom line.  I will still run for-profit races but given the option, I’ll choose local.  Which is a great lead-in for the next race, the Tarheel Ten Miler in Chapel Hill, which was two weeks ago.  Stay tuned.