A couple of weekends ago I raced the mile again.  It was an overcast afternoon, threatening to rain on us.  I ran into my friend Ronnie and a few of the high school students he coaches.  He introduced me to two sisters who had similar time goals. 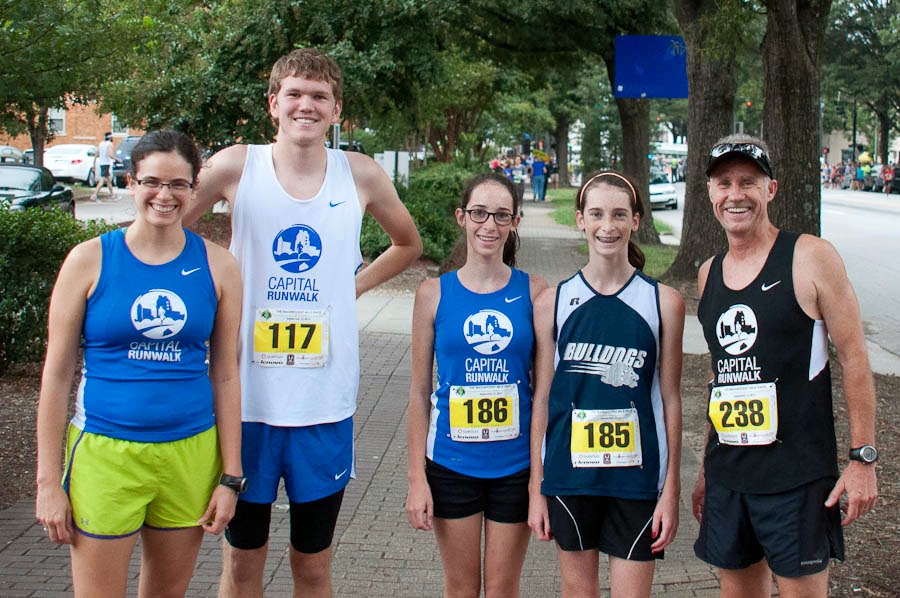 The men's race was first, I watched with Ian and snapped photographs of the faster runners.  Boy, they were fast. 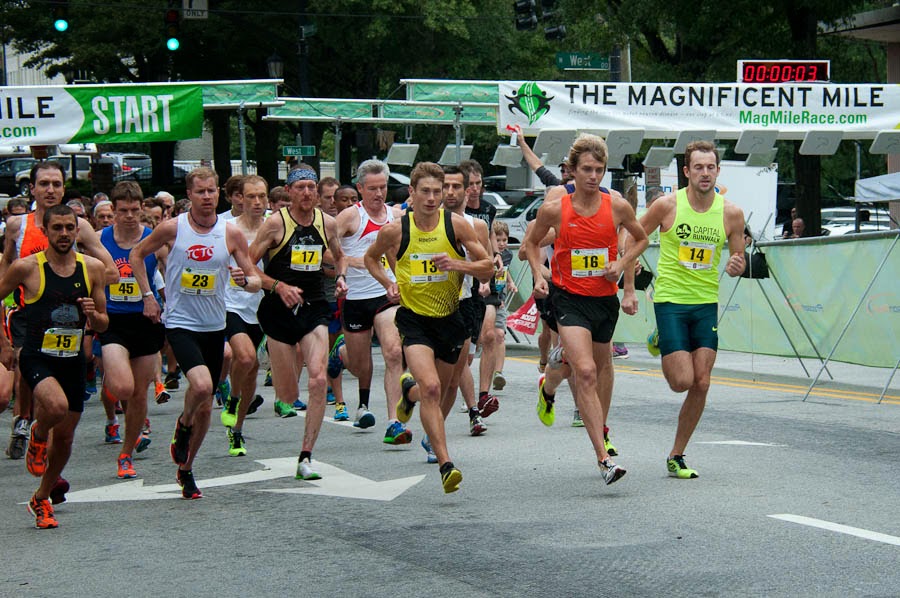 Then they had the women line up while some of the men were still coming in.  My goal was to beat last year's PR of 6:24 at this same event.  I lined up with the sisters, chatting about how we get nervous before races, etc.  I recently realized that before races it helps if I relax, smile and have a little bit of fun.  Some of my best PR's were at races with my sister and brother.  The last 5k PR came at a race where we danced a little before.  We are silly and it works.  Also, it doesn't hurt to have an annoying younger brother who is faster.

Back to the mile, the gun goes off and we're only in the third row back.  Fast sister goes off like a shot, and there I am trying to keep up with her going up the short hill to the state Capitol.  I really wanted to keep up with her, but I sadly could not.  It took me a quarter mile to realize this, though and at that point I'm sure my legs were fried.  First quarter was in 1:17.  Too fast! 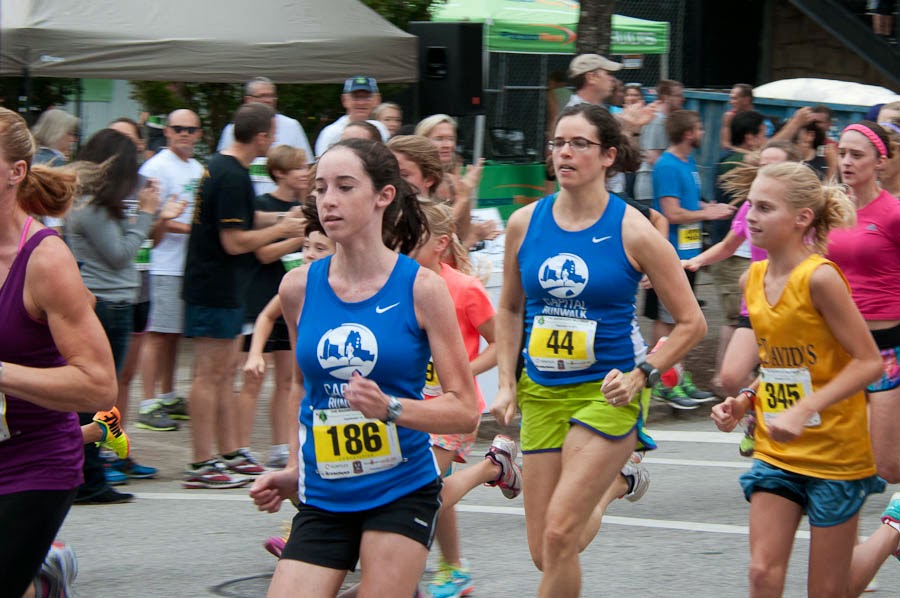 I slowed down significantly when I hit the corners going around the capitol.  Good thing no one was near me, so I didn't have to navigate around people.  I hit halfway at 3:00 on the dot, right on course for a 6:00 mile.  However, I could tell I was slowing down and I just couldn't get it back together, even with the downhill finish coming.  The second sister passed me with a quarter mile left to go.  I tried again, to catch up to her but it wasn't there.  I was able to speed up coming in to the finish.  I could see the clock and it was counting up towards my last PR.  6:16, 6:17, 6:18, 6:19.....  I finished at 6:24, with a chip time of 6:20.  Four second PR!  I'll take it.  I also got ninth in my age group. 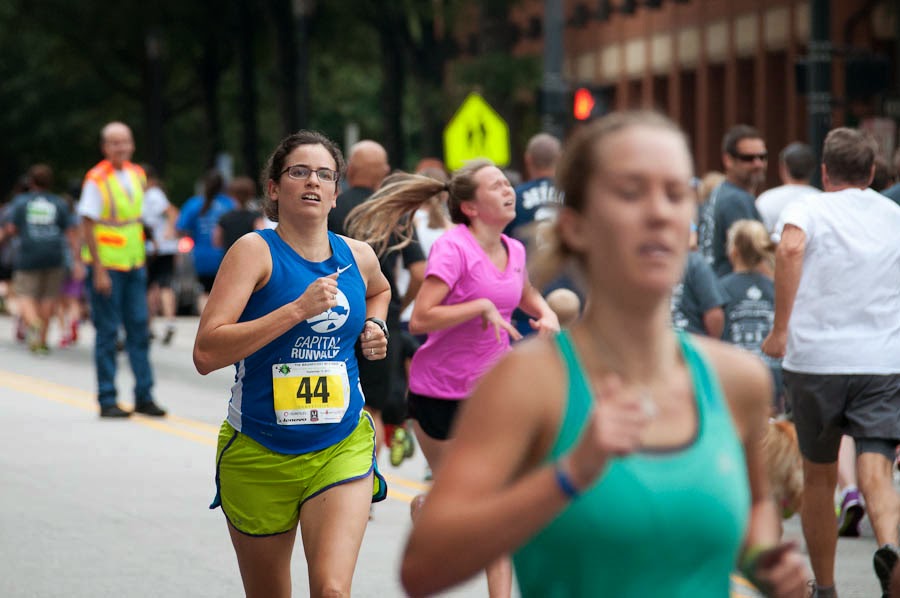 I was pretty beat at the end, my lungs were on fire and I coughed up so much phlegm.  Lovely.  My Capital RunWalk racing team and Complete Runner friends were also coughing. 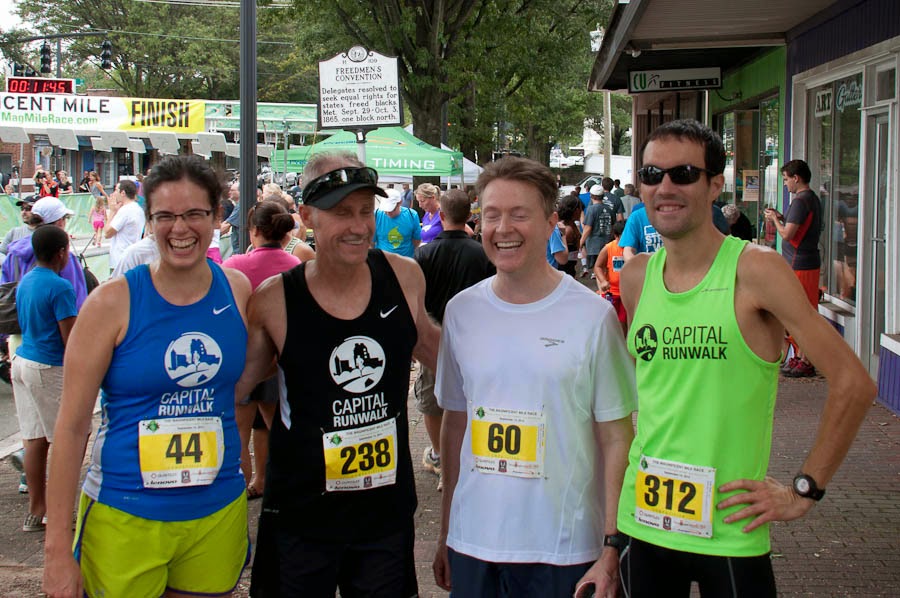 I know I've got a faster mile in me, if I can just hold myself back a little bit (but not too much) in the beginning.  I'm so sure of that I looked up other mile races in the area.  There is a Rocket Mile in Rocky Mount in early May, a track mile in Asheville in late May and a downhill mile in Raleigh in July.  There's also the Godiva track meets in Chapel Hill all summer.  So, no immediate opportunities but something to look forward to.  By the way, fast sister went under 6 minutes.  Maybe she didn't go out too fast.  Rodney also went under 6 minutes, and we're in the same pace group.  I'll keep chasing the 5:59 mile, it's bound to happen sometime.