One blog post to wrap up half a season

I'm really bad at keeping up with this thing lately.  Really bad.  I haven't posted a blog in over 2 months.  However I have lots of good excuses!  This is what happened in my life since my last blog post:

-I went house-shopping.
-Ran four races, three 5k's and a half marathon.
-I'm buying a house!
-I'm now a licensed architect!
-Lots of wedding-planning procastination.  Procastination takes plenty of time and effort.
-My car broke down on a construction site at Ft Bragg and the tow truck driver took 2 hours to find me.  Me to tow truck driver:  "Yeah, you know that sign that says "DON'T ENTER", you're going to have to enter there.  BTW my phone is dying."  Shit.
-Did I mention I'm buying a house?

So now I will summarize what I can remember of the the four races I ran:

Run for Young 5k
It's January 13th, and you might think that this would be the coldest race of the season, but you would be horribly wrong.  It was a beautiful sunny, 70 degree day in the middle of the coldest month of the year which would have been awesome if I didn't have to run a race that afternoon.  My goal for this race was to get below 25 minutes for the first time and to run even splits.  This was a pretty fast course for Raleigh, which means small hills rather than large ones.

So, looking at the splits I did really good at the even pacing, I slowed down a little in the middle but not much.  Plus, if I use a heat-adjustment calculator, if that race had been colder, I might have gone under 25 minutes.  One thing I learned is that in a hot race it is better to have even pacing or negative splits.


Run for the Roses 5k 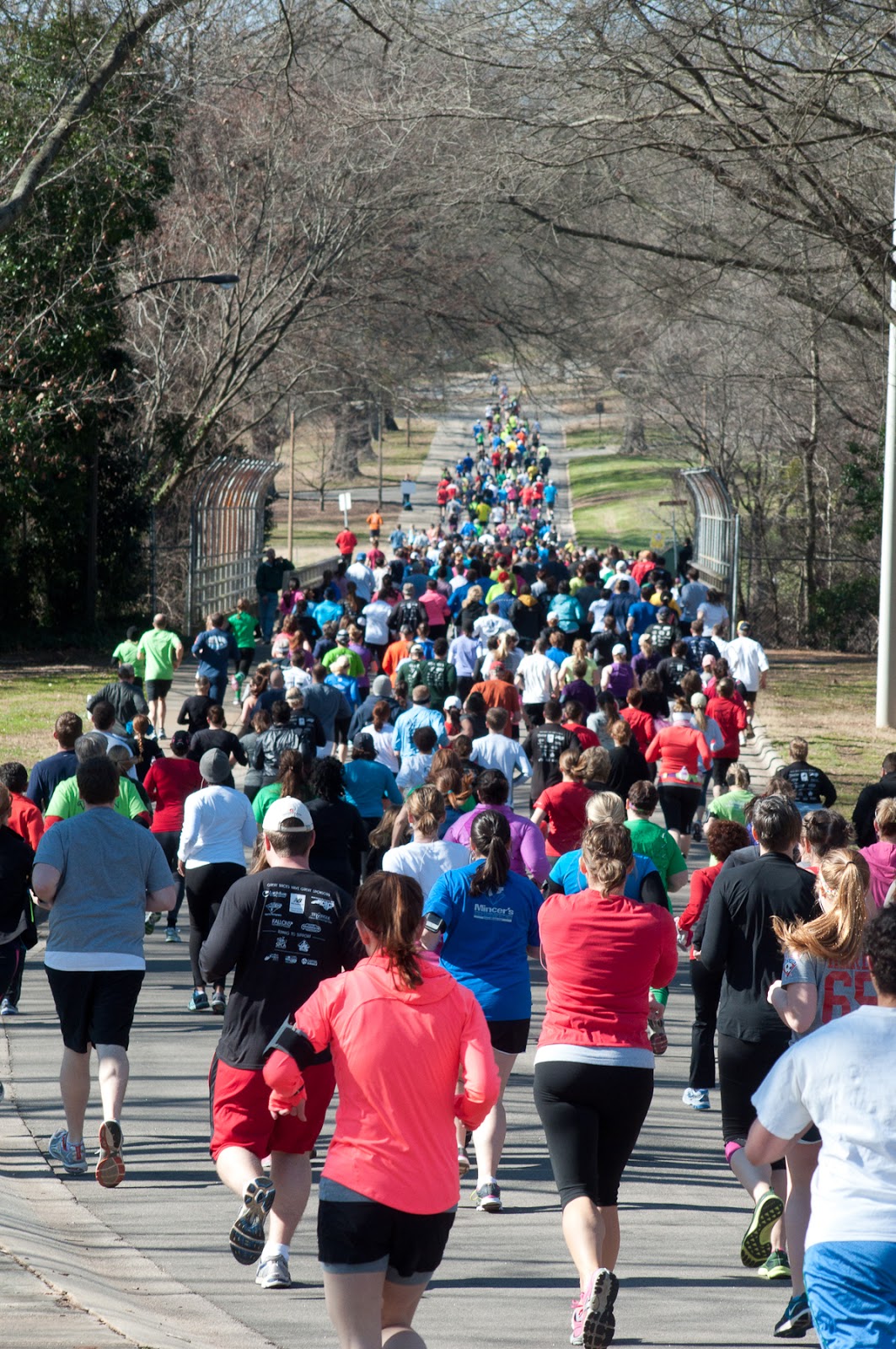 Now this was a hilly race!  It was about 45 degrees, sunny and the entire race was on Dorothea Dix campus which is one of the hilliest areas in Raleigh.  It was all on roads.  My goal again was to get a sub 25 minute race.  I got in some warmup running, maybe half a mile.  I stripped from a long sleeve shirt to just my Capital RunWalk tee and a pair of North Face knee length tights.  I started out good, that first hill did not feel so bad.  It didn't feel so great for other people though, I could tell.  All the hill repeat training and strength training paid off!  I got to the mile mark and saw +Tim Clark .  At some point I noticed these two guys that were running together near me.  I decided to tag along with them.  At some points I was in front of them and sometimes they were in front, but we kept mostly together through the second mile.  The course wound back around to near the start a couple of times, and Ian got some funny pictures where it looks like one of them is alternately checking out my ass and trying to be ridiculously photogenic guy.  One of them sped up around mile 2 and the other guy got ahead of me also, but they got me through that rough second mile.


I wasn't really sure how I was doing because my watch was not being accurate on distance over all those hills.  I kept hoping the finish line was around the next corner.  Then at the last hill, Coach Tim was there yelling "Big PR!"  He was on his bike, and I guess I looked like I needed the extra motivation, so he rode his bike along next to me yelling "pump your arms, lift your legs!"  It was great.  Haha.  I found some extra energy somewhere to get up the hill and cross the finish line sprinting. 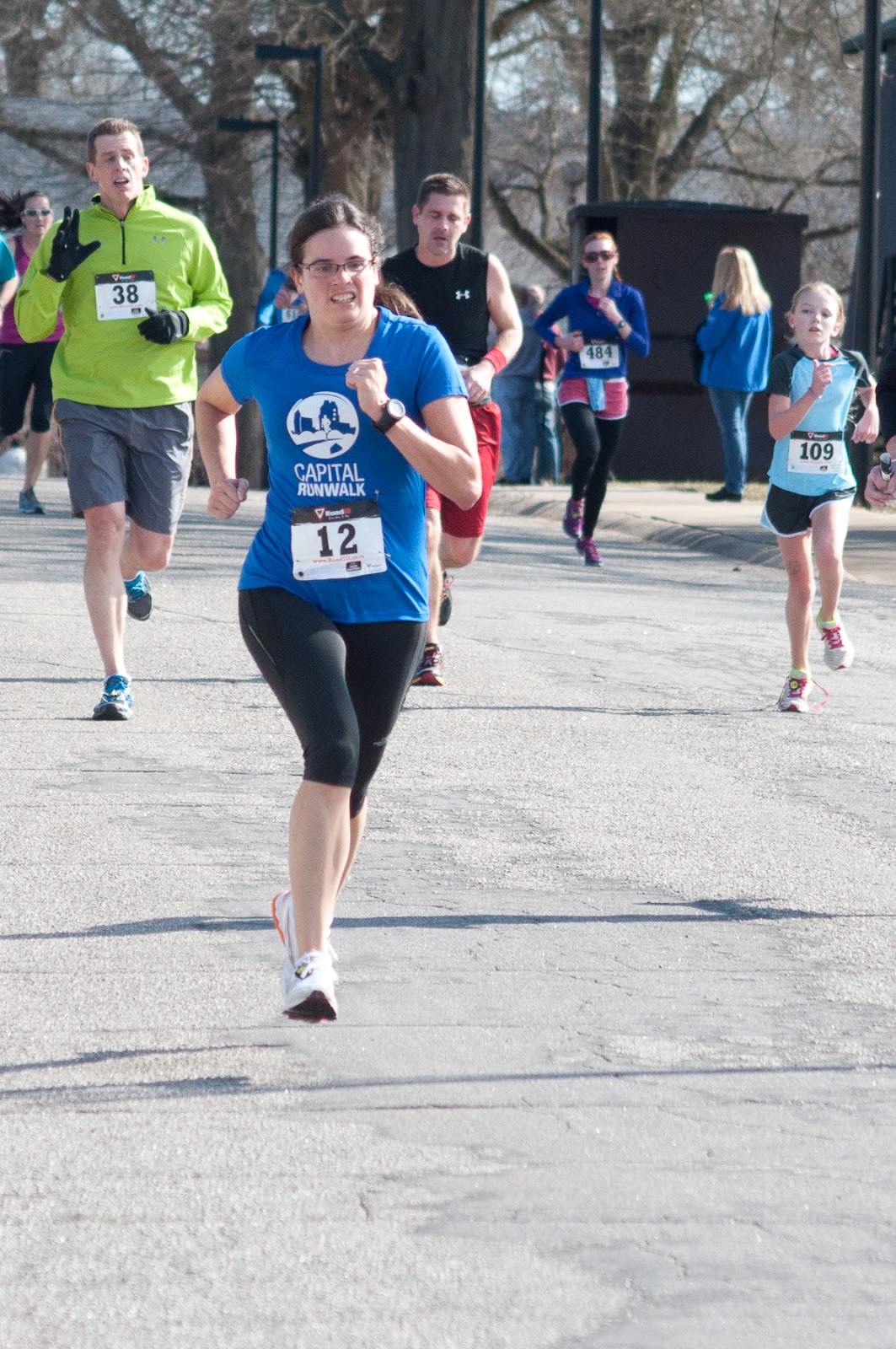 And here's the splits from my watch: 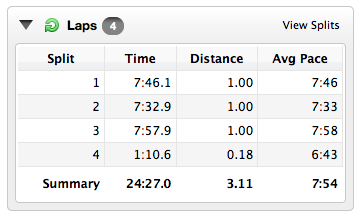 
Run for the Oaks 5k

This race is known as the oldest and fastest 5k in Raleigh.  My goal here was to run it in about 24:14, which was my best guess based on my time from Run for the Roses adjusted for being a flatter course.  I planned ahead and got to the race an hour early, got in a 1.25 mile slow warmup jog, used the port-o-john and did some dynamic stretching drills.  I saw some friends from Complete Runner before the race.  Billy said I could do this race in under 24 minutes.  This seemed like an ambitious goal to me since I had just broken 25 minutes. I do love his optimism, though.

So the race started and I was pretty close to the front this time.  I started with my running friends but they got off to such a quick start I couldn't keep up.  Most them were in the 21-22 minute range for this 5k.  Around one mile I remember looking at my watch and seeing a 7:20 pace and thinking that I should feel a lot more worn out than I did.  Usually when I start that fast, I peter out in the second mile and the pace drops to 8:30 or 8:40.  I still felt strong in this race.  I did slow down a little in the middle but I was able to finish strong.  Somewhere in the middle of the race I noticed a woman in a gray jersey and decided to race her.  She looked about my age, and I looked her up later using the time and race photos.  She's in my age group and also doing the Second Empire series, so she really is my competition.  We've been neck and neck in most of the Second Empire races and I'm just a few points behind her in the standings.  She ended up beating me across the finish line by a few seconds, but our chip times were the same.  Now I know who to line up near at the start, right?  Keeping up with her kept me going in the second half of the race, and I crossed the finish line in 23:44!!!  Billy was right, I could do a sub 24 5k.  What's next?  Under 23?  Ok, one thing at a time.

My next goal is a sub 2 hour half marathon at Shamrock.  Of course, the first thing I do when I get home is pull up the McMillan running calculator to see what an equivalent half marathon time is for my new 5k PR.  It's a little under 1:50.  Ok, I know I can do under 2 hours, but 1:50 would be a stretch right now.  Maybe next season.

Splits for Run for the Oaks: 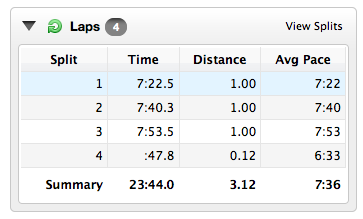 Sometimes it just hits you how lucky you are to have such great running buddies.  Sometime in November after a Nog run we were having a beer and someone brings up the Shamrock Marathon (you know who you are).  Several people expressed interest and/or were peer pressured into saying they would go.  I said I would go because I know a couple of people in Virginia Beach I could stay with and it is awesomely flat up there.  Also, it's Barry's birthday the Friday before and he wanted to celebrate his 60th with his first marathon.  Why not?  That's how 26 people from Raleigh ended up traveling to Virginia Beach for a race.  My friend +Elizabeth Lamy  traveled from Charlotte to run with me.

I had made a mistake the week before; I ran a few miles the day after Run for the Oaks when I should have relaxed.  I got a cold, which wasn't much more than a sniffle but still worried me that it could get worse and mess up my race.  So, I was drinking grapefruit juice and taking echinachea like it was going to save me from the apocolypse.  I also slept almost all day Saturday in preparation for the Sunday race.

One thing I did right this time was eating.  I didn't eat so much at any one point that I felt that ugh gross full feeling but most of what I ate was low fat carbs.  I found this Runner's World article and tried to follow its advice.  Which included low-fat waffles with maple syrup on Saturday morning.  Oh yeah, nothing better than real maple syrup.

So, the night before we are carbo-loading at an Italian restaurant in Virginia Beach.  Coach Tim and his wife are there, Elizabeth, Ian, lots of people from my running group.  Barry recites a pretty awesome poem which incorporated everyone.  Billy predicted that I'm going to run a 1:50 half marathon and cajoled Coach Tim into predicting "under 2 hours".  No pressure.  Haha.
Me and Elizabeth got to the start line just in time, totally underestimating the craziness that is finding a parking space in downtown Virginia Beach on race morning.  No warmup, just get in corral 6 and wait.  We were in corral 6 because I gave 2:15 as my estimated time when I signed up 3 months ago.  I should have moved up, but it worked out ok in the end.  I didn't see anyone else from my running group, they were all ahead of me. 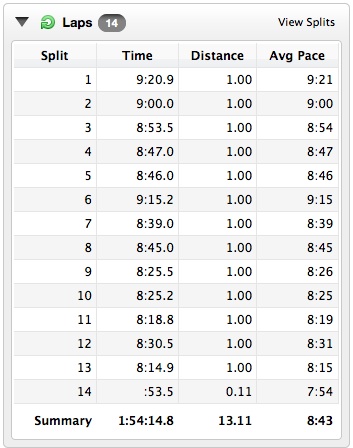 To summarize, of the last four races, three were personal records.  This was a great season of running.  It's not quite over yet, I have four more races in the Second Empire series to run:  St. Timothy's Spring Sprint 5k (next weekend), RunRaleigh Half Marathon (in two weeks), Wake Med Distance Festival 5k and the NCRRC Invitational 10k.  This will be my first 10k, and my sister wants to run it, too!  After that race on May 19th, I'm going to take it easy over the summer.  Well, not too easy, just less races and more trail running.