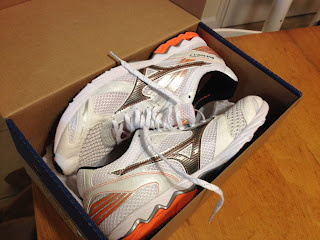 Orange is a fast color, right?

I bought new running shoes today.  Not just any running shoes, but racing flats!  A pair of Mizuno Wave Ronin 3, they were on sale and fit me better than the Saucony pair I tried on.  They're so light, I think they might be made of rainbows and bubbles.  I'll run in them tomorrow for a speed workout, 6 x 200 meters is the plan.  Then, I'll be running the Jingle Bell Run 5k this weekend in them.  I ran into Coach Tim at the store, he was doing the social run and he was excited about the racing flats.  Apparently the Jingle Bell is a PR course!  It didn't feel like it last time I ran it, but I messed up and wore really warm UnderArmour, long pants and a scarf.  Halfway through I had to take the scarf off and hold it.  Overheating running engine!

My 5k history has been a little spotty since I started training for longer distances.

Here's the breakdown of all my 5k's:

So, I've been running 5k's for about a year and half, and my PR is the third race I ever did!  By almost two minutes!  What was different?  At that point, I was doing strength training and not much cross training.  I had just learned about speed workouts and had done a couple.  I think I was using a 5k improving training program I found in Runner's World.  I also wore face paint that day and skeleton gloves.  I waved my fingers at the people along the race!  I didn't bring my phone, my MP3 player, or my water bottle, just my watch.  I just enjoyed the race.  I think it might be the only race where I haven't listened to music, other than my first 5k.  I also didn't have much time to run the week before the race, only one 2 mile run that I did really fast.  Also, in the last quarter mile or so of the race, my friend Emerson passed me and I was desperately trying to catch up to him! 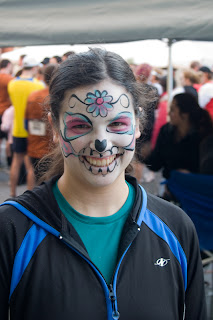 Well, now I know what to do for the race:
1.  Wear racing flats.
2.  Leave the phone.
3.  Leave the water bottle.
4.  Wear light clothing, maybe just shorts and short sleeved shirt.
5.  Face paint?  Haha, maybe not.
6.  Jingle bell gloves?
7.  Try to stay away from Wendy and her reindeer antlers.  Unless she passes me in the last mile, then try to catch her!