I've got two race recaps for you today because I am terrible at consistently doing blogposts.  Also, I've been doing lots of daydreaming.  About running.  Nothing gets done when I'm like that, except lots of pacing back and forth in my apartment and Ian eating cereal for dinner.

I started out with a few runners from Complete Runner, some folks that are faster than I am.  I didn't hear the starting yell or bell but we started moving.  Slowly.  There were a whole crowd of walking people near the front.  This is now one of my pet peeves.  People who enter 5k's to walk and go to the front of the line.  Get out of my way!  I don't have anything against people walking to support a cause, that's awesome, raise money, walk, have fun.  But, get out of my way!  I'm trying to race here.

The first quarter mile was ducking and weaving through the crowd.  I ended up on the sidewalk a lot or squeezing through innocent crowds of jingling people.  The first quarter mile was at about a 9:00 minute mile pace.  Then I got past the crowd and put on a little speed to make up time.  I say this like it was a conscious effort on my part, but it wasn't.  Then came the dreaded second mile.  I had mentally prepared myself for this, because in most of my 5k's, I get excited in the first mile.  Then I slow down drastically in the second mile and then have this moment of fail where I give up on racing altogether.  The conversation in my head goes something like this:  "This hurts, my stomach hurts, I'm breathing way too hard.  Why did it get so hard to keep the pace all of a sudden?  Look at those fast people, they don't look like they're having any fun.  Why am I doing this?  To try and be like them someday?  Is this really worth it?  Probably not."  Major self-doubt.  Then I get closer to the end of the race, the last mile or half-mile and I decide I'm going to race again.  "Yeah, let's go!" says my inner racing demon.  However, I already slowed down way too much to make up for the second mile and I miss whatever goal I had.  Ooops.  I've done something like this three times. 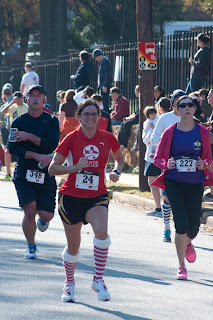 Back to the Jingle Bell Run.  Same thing happened, except for one big difference:  I didn't give up.

I saw those fast people at the front (the course was out-and back) around the time when everything got harder.  I had the same thoughts, but I prepared myself beforehand to tell myself if I can run the last two miles of a marathon, I can race the last two miles of a 5k.  Plus, it doesn't matter how fast I go, it will not hurt as much as those miles.

So, here are my splits: 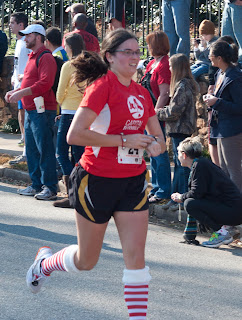 I did still slow down a lot in the second mile.  I could feel the ebb of the crowd flowing past me, and a few of my running buddies past me.  I just didn't have enough to keep up with them.  It didn't help that my stomach was threatening to cramp up.  Why did I eat cereal two hours before the run?  Another lesson: no more dairy before races.

Whoa, this post is long enough and my creative juices are running out.  I'll tell you about the Jolly Elf Trail Run tomorrow.  It's gonna be good!